I have loved books and reading for as long as I can remember. I was thinking about libraries the other day and I realised that I use libraries less now than ever before in my life. The reasons are the same as they are for everybody else –

I can now look things up myself on my phone, ipad and laptop using the mighty Google.

I can now buy second-hand books in charity shops for as little as 50 pence and also very cheaply online and often postage free.

New books, too, are extremely affordable when bought in supermarkets or online.

I can also buy e-books and read them on any of my electronic devices. (I don’t, because I still prefer books, but I could.)

It’s no wonder that libraries and independent bookshops are closing in Britain.

As a child in the 1950s, we went to the library whenever we were in the nearby town which was five miles away. Below is a picture of the building it was in – taken a bit before the 1950s! When I lived in that area the building housed the library , the Labour Exchange and my dad’s office – he worked for the Forestry Commission. Although there was no library in our village (it was tiny) there was a lady who lived in a little house next to a chapel who ran a small book lending system from her front room. The main library used to drop new books off with her every so often.

What I remember about libraries in the old days (even though I loved them) is how quiet and serious they were. You absolutely did not make a noise of any sort or you would be told off. I loved them because I love books and reading but I can see how someone less committed to reading could have been put off by the interior of a library.

Above – the interiors of a couple of old libraries. The pictures can’t convey the deathly hush which prevailed!

The pre-digital way of book-lending.

I have no recollection of ever being asked to do any independent research for homework when I was in school – not even when studying for A-levels. Lessons were all based on notes dictated by the teacher then and on learning by rote – but that’s another blog post! While I was at university I preferred to do most of my work in the university library. This was partly so that I could use the reference books but also because the atmosphere was more conducive to study than a cold, gloomy student rented house.

Libraries now often have art or history exhibitions running, they have computers the public can use, they are bright, friendly and welcoming. The children’s sections have toys and games and regular organised activities. Yet libraries are still closing all over the country. Where they have been saved and continue to function, they are often rehoused in a smaller space in a new building. The one shown below is a Victorian library building near where I used to work. In spite of a well-fought campaign to keep it open, it was closed over ten years ago. I believe it now houses offices so at least it isn’t empty or worse – demolished. The new library which replaced it is in a modern purpose built community centre. Public lending libraries began here in Britain in the 1850s, the main pioneer being William Ewart. Since 2010, nearly 500 libraries  have closed in England, Wales and Scotland. Some libraries facing closure have been taken over by volunteers.

The iconic red telephone boxes found all over the UK are beginning to disappear but, thanks to a BT scheme called Adopt a Kiosk, many unused payphone kiosks have been transformed into libraries. This preserves the heritage of the red kiosk, particularly in rural locations and provides a library service in areas which lack one. Most of these libraries are left unlocked and are stocked by donations from local people. Anyone is free to borrow a book and donate a used book. 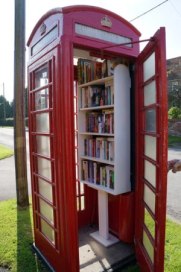 reading and And now, a few quotes about libraries:

Whatever the cost of our libraries, the price is cheap compared to that of an ignorant nation. —Walter Cronkite

Reading is to the mind what exercise is to the body. —Joseph Addison

As usual, I would like to say that all images and facts used in this post have been gleaned from the Internet and are readily available. However, if anyone objects to anything in this post, for any reason, please contact me directly so that I can remove it.