As a result of this dreadful pandemic, I have been doing a lot of sewing. I dusted off my old Singer sewing machine and surprisingly, after several years of doing very little sewing (I do more knitting these days), I was still able to thread the old workhorse up and operate it like I’d ever been away. Whilst spending hours on the machine this last couple of weeks, I’ve been doing a lot of thinking. In the 1950s, when I was small, all my jumpers and cardigans were hand knitted by my mum as were her own and those of my brother and sister. My mum also made all the dresses worn by her, me and my sister. The same applied to all the families we knew. Towns with clothes shops were a couple of hours’ drive away and also making clothes was cheaper than buying them.

My mum’s sewing machine was a hand-operated Singer. She bought it new when she got married and she told me she made all my baby clothes on it 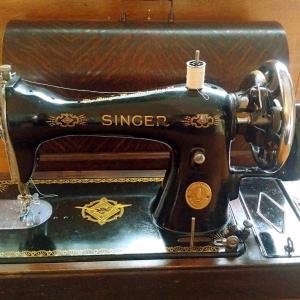 My mum was such an excellent dressmaker that I had no incentive to learn to sew myself. I was knitting for myself by the time I was in my teens but if I saw a dress I liked in a fashion magazine like Honey, my mum could have it copied for me a few days later, often combining several different dress patterns to achieve the right result. When I went to university and was living on a limited budget, I worked out that if I wanted things I couldn’t afford I’d better make them myself. There was a sewing room in my hall of residence which was equipped with electric sewing machines. I had a brilliant choice of shops and markets selling fabrics as I was in Nottingham, a sizeable city. So I taught myself to make my own clothes. Two years later my mum and dad bought me a Singer Zig Zag machine for my 21st birthday. It’s the one in the photo below and it’s still going strong.

Most women my age can either knit, sew or do both. Young women who knit and sew now are in the minority. I looked up the history of the domestic sewing machine and it’s really interesting. The domestic sewing machine was invented by Isaac Singer in 1850. Through the late 1800s, in the US and in Britain, the sewing machine was a status symbol and ornate enamelled models were displayed proudly in high class drawing rooms. After 1900, when the sewing machine was being mass produced and could be afforded by poorer families – on hire purchase – the models on sale were less ornamental and more utilitarian. At the same time, shop-bought clothing became more readily available. The developments of the industrial sewing machine was why factory made clothing became more affordable. As a result, hand-made items were considered inferior and the sewing machine was relegated from display to a hidden corner. People buying a new machine were sometimes reassured by the company of discretion when delivering. Shop bought clothing was considered superior. This attitude reminds me of a similar one towards baking when I was growing up. My mum, and everyone else’s, baked cakes every week for the family. They baked cakes, scones, pies, biscuits. But when somebody was coming to tea they popped out and bought a shop cake. As if home baking was inferior and a sign of poverty. 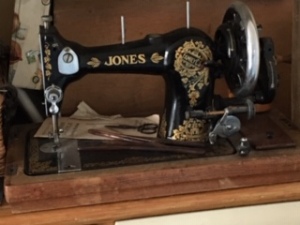 My antique Jones sewing machine which is in perfect order and sews beautifully. It was bought for me as a present by my one of my daughters a few years ago. I was a Jones – but no connection with the sewing machine manufacturers!