Here in Britain today is Mother’s Day, or Mothering Sunday to give it it’s original title. As it was traditionally associated with the church and Easter, it is what’s known as a moveable feast. It is always on the fourth Sunday in Lent. This year Easter is very late so Mothering Sunday is also late.

Mothering Sunday here began as an explicitly religious event of the 16th Century, with no connection to mothers at all. The word “mothering” referred to the “mother church”, which is to say the main church or cathedral of the region. It became a tradition that, on the fourth Sunday of Lent, people would return to their mother church for a special service. This pilgrimage was apparently known as “going a-mothering”, and became something of a holiday event, with domestic servants traditionally given the day off to visit their own families as well as their mother church. It is said that on their way home they would pick some wild flowers from the hedgerows to give to their mothers. 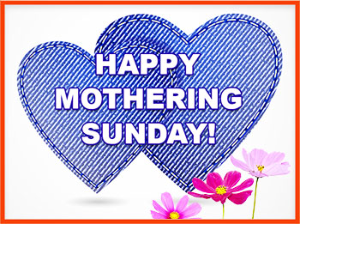 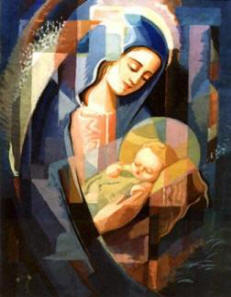 When I was a child we three children always made a fuss of our mum on Mothering Sunday. We would buy or make a card and buy a small gift with our pocket money, often a bunch of flowers or a house plant. We also, encouraged by our dad when we were very young, made an effort to be of some help to her and to lighten her workload for a day. It usually only amounted to making her a cup of tea or helping with the washing up.

As a mum myself, anything my daughters bought me, made me or did for me on Mother’s Day always touched me and still does. As a teacher I enjoyed seeing the love and care the children put into making a card to take home for their mothers – or, if the mum was not in their lives, for their gran or a special aunt. The commercial side of the day has greatly increased since the 1950s but now as then, it’s the sentiments which count. A loving message, some flowers, a carefully chosen card, a hand made card from a young son, daughter or grandchild, a small personal gift – these are the things which melt our hearts.

Only recently I discovered that, although most countries have a Mother’s Day, the date varies.

The extent of the celebrations varies greatly. In some countries, it is potentially offensive to one’s mother not to mark Mother’s Day. In others, it is a little-known festival celebrated mainly by immigrants, or covered by the media as a taste of foreign culture.

In America the Mother’s Day holiday arose in the 1900s as a result of the efforts of Anna Jarvis, daughter of Ann Reeves Jarvis. Following her mother’s 1905 death, Anna Jarvis conceived of Mother’s Day as a way of honoring the sacrifices mothers made for their children. Years later, Jarvis openly criticised the way the day had become commercialised.

In the Catholic Church, the holiday is strongly associated with revering the Virgin Mary. In some Catholic homes, families have a special shrine devoted to the Blessed Virgin Mary. In many Eastern Catholic and Eastern Orthodox Churches, a special prayer service is held in honor of the Theotokos Virgin Mary.

In Islam there is no official Mother’s Day, but the Quran teaches that children should give priority to loving their mother over their father.

Happy Mother’s Day to all mums reading this whether your day is today or on another day!!

Images and some information sourced from the Internet. If anyone objects to any of this post’s content please contact me directly.